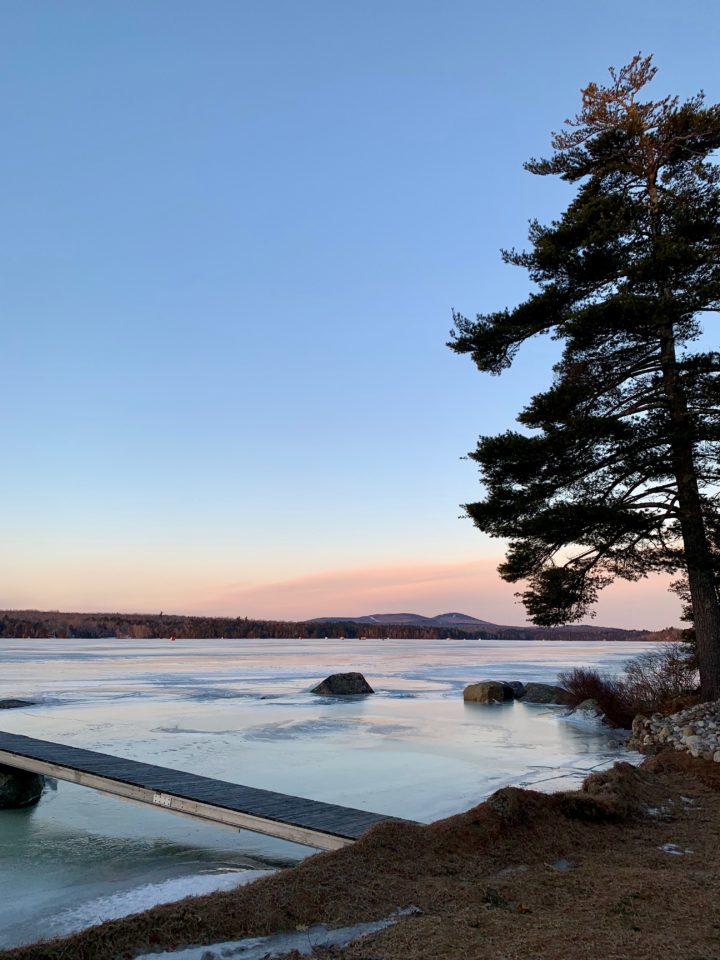 Good morning from Maine! It’s another gorgeous day on the lake, but there’s some weather coming in later today. I actually changed my flight time so I can leave earlier. As much as I’d love to see some snow, I really don’t want to get stuck at the airport tonight.

We’ve had a nice visit. My grandfather has been in great spirits, and it’s been good to spend time with him. We took him out riding around yesterday — he has a van that is wheelchair accessible. He likes to ride around town and see the sites and talk about the buildings and his memories.

We drove down the street where he raised his five kids, and he and mom pointed out the houses of all their old neighbors and chatted about the old days. When I was growing up, we visited my grandparents every summer and stayed in that house, and it’s funny how much smaller it looks now. I have memories of it being much bigger.

Fun fact: that house is on the same street as Stephen King’s house… a mile or two away, but still. Pretty neat. He’s lived there as long as I can remember and still lives there today. We used to see him at the mall sometimes when my grandmother would take us shopping; he’s very unassuming. I’d have never known he was anyone famous if she hadn’t pointed him out to me

After we saw all the sights, we drove over to Chick-Fil-a and got lunch. Grampa loves Chick-Fil-a. It only came to Bangor a few years ago, and he never had it until then. He can’t get over how everyone says, “My pleasure.” He thinks that’s fantastic.

That outing was about all he could handle, so mom and I left him to take a nap and came back down to the lake and hung out for the rest of the day. It was nice to just sit and relax. I don’t do that very often, as you all know! We watched a few episodes of Miss Fisher’s Murder Mysteries. They’re good, light entertainment.

It’s been a short trip, but I’m glad I came. We made some nice memories, and even though I didn’t see much snow, it was good to get away to one of my favorite places.

I woke up this morning to find my laptop dead — or the power charger. I’m not sure which, but I’m typing this on my phone. It’s a bit cumbersome so I’ll sign off and get my day started here. Fortunately I wrote most of this post last night when my computer was still working.

Have a blessed Sunday!

Happy weekend, friends! Today I've got another Saturday Try On Haul. This is a budget-friendly fashion haul, for the most part. I have a few pairs of premium denim at the end, but most of what I tried this week came from Amazon and Target, and there are some cute transition pieces in here for those of you who are done with winter shopping. I hope it's helpful!
View the Post
Fall/Winter Fashion January 25, 2019

Happy Friday, friends! Cheers to the weekend! Today I rounded up 5 ways to wear grey jeans from outfits I've shared over the past few years, and my Fashion Friday linkup is live. Hopefully you can shop your closet to recreate some of these looks, but of course I'll provide links where I can. This is really more or less about the color combinations.
View the Post
Lifestyle January 24, 2019

Greetings, friends! We're taking a break from fashion today for another room reveal! I debated splitting this post into 2 or 3 parts, but I ended up putting them all together, so it's a long one. These areas of my house are all open to one another, so I thought it made sense to group them together.
View the Post
View All Posts