On our way home from Virginia last weekend, we stopped at Virginia Safari Park. This place was new to me. I’ve driven past it probably a hundred times and never knew it existed, but when we stopped in Lexington (on our way to Virginia), the folks in the Visitor’s Center shared this with us an an option for things to do in the area, and my kids jumped at the chance to see wild animals up close and personal. They were determined to go and wouldn’t take no for an answer. My husband and I were a bit hesitant, but after reading a few reviews online, we decided that there wasn’t much chance we’d get our heads bitten off so we agreed to stop in on our way home.

Safari Park is pretty much a drive-thru zoo. Animals roam freely on the 180-acre property, and you drive through on a 3-mile paved loop and feed them out your window. This was the scene that greeted us as we emerged from the ticket booth: 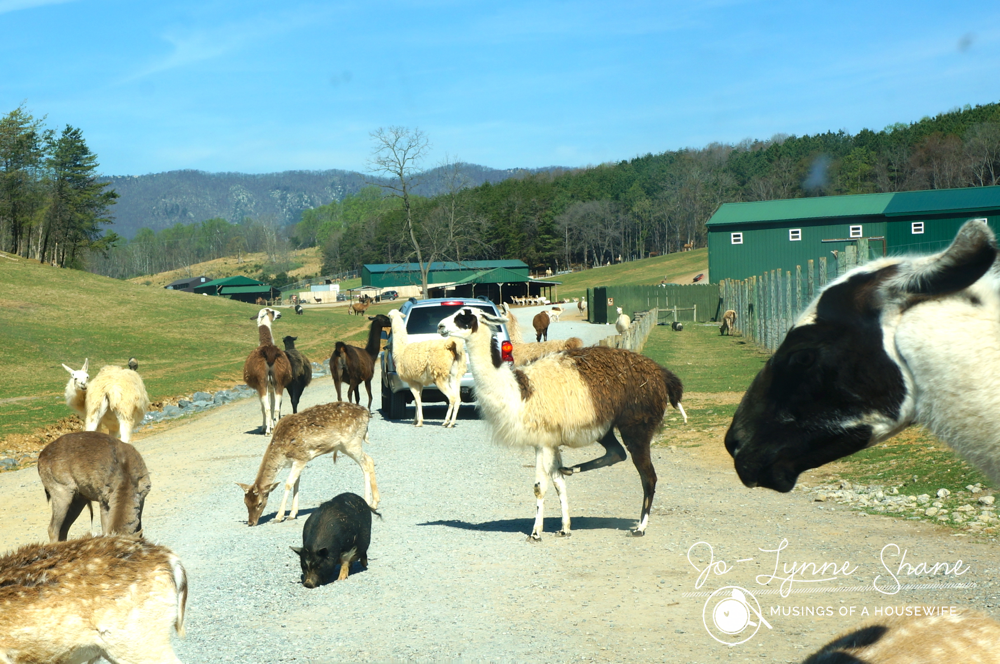 I am serious!!!! We were laughing so hard. At first the kids were afraid to roll down their windows so mama had to show ’em how it’s done. Soon the kids decided to get in on the fun. This guy right here… He was a pistol. He was happy to eat my food. Then before I could blink, he STOLE my bucket.

It was hard to get good pictures. This girl had the right idea. Not all are in the drive-thru area. There is a separate village walk-through for certain animals including the giraffes. Don’t skip that part. The giraffes walk right up to you. You can feed them too, but rather than buckets, you feed them right out of your hands. R really wanted to do it, but the second the giraffe’s wet tongue touched her hand, she squealed and dropped the food, much to the dismay of the unfortunate giraffe. I got a great shot. One of the highlights of the excursion was seeing a mama kangaroo with a joey in her pouch. I don’t think I’ve ever seen that before. There was even an aviary where you could walk though and the birds would land on a stick you hold out to them. I don’t do birds *shudder* so I waited outside. The kid had a BLAST. This was the coolest thing we’ve done in ages. Yeah, I had to wash my car, and I still need to vacuum out the animal food, but it was so fun to get that close to animals that we usually only see behind large fences at the zoo.

If you’re ever on your way down I-81 through the picturesque Blue Ridge Mountains and want a place to stop for a half-day family adventure, I highly recommend Virginia Safari Park or one of their reciprocal zoos, Gulf Breeze Zoo in Florida and the Reston Zoo in Vienna, Virginia. We paid for our tickets, and this post is not sponsored in any way, not that there’s anything wrong with that . . .

(Funny how I now feel the need to provide disclosure even when there is nothing to disclose. HA!)

How to Wear a White T-Shirt #FashionFriday

Sometimes I think we get to preoccupied with putting together creative wardrobe combinations that we forget how stunning the basics can be. I used to live in black t-shirts and jeans, and now I rarely think to wear something so basic. But black and denim is such a great look. Another often overlooked wardrobe essential is the...
View Post 29 Comments
Fashion April 23, 2014

Despite the fact that my first outfit involves boots, I feel like spring has finally arrived FOR GOOD here in PA. If the temps dip below freezing again, I might lose my ever-loving’ mind… what I have left of it, anyway. But we enjoyed a gorgeous weekend in Virginia for Easter, and the weather forecast...
View Post 18 Comments
Appetizer Recipes April 22, 2014

Hi, Its’s Colleen here with one of my favorite things to eat… To-ma-toes! I have quite the obsession with tomatoes. As far back as I can remember I have adored them. My dad grew a huge garden while we were growing up. If you didn’t find me sitting high in the cherry tree eating my weight...
View Post 1 Comment
Beauty April 17, 2014

Despite the freezing temperatures this morning, spring has indeed sprung, and it is time to update your skincare and makeup for spring! In the wintertime we tend to need heavier products, but when warm weather approaches, you might find that your current skincare products are too rich. If your face is starting to feel greasy...
View Post 13 Comments
View All Posts