The blogosphere is filled right now with posts on how to transition the kids to their new school schedules and how to pack healthy lunches and how to get into a good routine and basically how to make your life easier during this transition period.

I’m pretty much doing it all wrong.

We did not start our kids on earlier bedtime and earlier wake-up times a week or so before school started, gradually working them up to the school schedule. We didn’t buy new backpacks and lunchboxes. We didn’t stock the pantry with healthy lunchbox items. We didn’t make them review their math facts or brush up on their reading skills. We didn’t even take them shopping for first-day-of-school outfits (although we did get school supplies and shoes, thanks to Payless!)

We pretty much let them enjoy summer up until the last possible second, and then, BAM! We went to a concert the night before school started and left a babysitter to put them to bed at an early hour. Then we got them up at the crack of dawn and had them pick out outfits and pack their luches and sent them off on their merry way.

Well, it wasn’t QUITE that easy. My son’s middle school bus came early, and we were just walking out the front door to snap a photo when we discovered the bus was already at his stop. He took off at a run, but the bus drove off without him, driving right past our house as it did so. Ironically, our neighborhood has two busses (yeah, we are a bit overrun with children) so the other bus saw the whole thing and stopped for him and offered to take him. It. Was. BIZARRE. What bus takes off and leaves a kid on the first day of school? I guess this is trial by fire, right? You better bet he was down there a good five minutes ahead of schedule THIS morning!

The next shift went much more smoothly. The girls were excited and eager to get their day started. Both were dressed and ready to go with 20 minutes to spare. Someone didn’t want to be left behind. We had time to get a lot of photos, and then at the bus stop we got a few more. 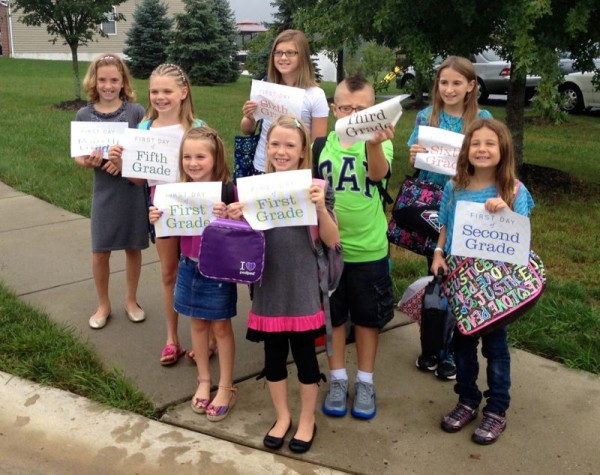 My son at 12 thinks he’s way too cool to pose for a ton of photos with the neighborhood, but he obliged me just one shot when he got home from school yesterday. He’s a good kid. He humors me. I wouldn’t necessarily recommend my approach to back-to-school transition, but I just couldn’t resist eking out every last minute of summertime that we possibly could.

Having the house to myself for an entire seven hours was definitely . . . different.

And it is AMAZING what you can accomplish when you aren’t hopping up every 30 minutes to settle an argument or fix someone something to eat or clean up after their own sloppy attempts.

Savannah was lost without the kids at home. After we got back from the bus stop, she stood at the door and whined for about five minutes, then walked around aimlessly for another five minutes, and then took up residence under my desk, where she remained for most of the day. Yes, my desk is that messy all the time. Don’t judge me.

This is her new favorite hangout, and it suits me just fine. I rather enjoy the company.

All things considered, we are transitioning quite nicely. As much as I love summer, I have to admit that this routine is much more conducive to getting my work done, and it’s nice to know that the kids are somewhere that they can be challenged and inspired.

I hope everyone else is getting settled into their new fall routines! I’m enjoying the calm before the storm. I know it’s only a matter of time before we’re running amuck in birthday celebrations and holiday preparations. But for now, I think I’m liking September quite a lot!

18 thoughts on “Back to School They Go!”

It is September! School is back in session and mama’s feeling footloose and fancy free! Unfortunately, mama has been really lax with her picture taking this week. But here’s what I’ve got. I wore this super casual outfit hanging around the house on Saturday and over to a friend’s house for drinks that evening. This...
View the Post
Main Dishes September 4, 2012

I’m a huge fan of quiche, and this is, hands-down, the BEST Crustless Quiche Recipe. Trust me on this. Last week, I was short on dinner fixin’s, but I did have a bunch of eggs on hand and a package of sweet Italian sausage that was threatening to deterioriate in the back of my fridge if...
View the Post
Diary September 4, 2012

I am too old for the pit.

My husband and I are huge Springsteen fans. HUGE. We have been to at least five of his concerts together, and that is in addition to the ones my husband saw before he knew me. Every time we have gone, we’ve sat in the stands like dignified adults. It’s great. It’s fun. No one puts...
View the Post
View All Posts