My boys are huge Eagles fans. HUGE. My husband grew up in the Philly suburbs and he has raised our son to be a faithful fan as well. We’ve been to Sixers games (basketball, for those of you who are as clueless about sports as I am), Phillies games (baseball), Flyers games (hockey) but never an Eagles game. Eagles games can tend to be a bit rowdy, so most families with younger kids opt for pre-season games to acquaint their kids with the joy of football. My son actually had this on his bucket list for the summer – to attend an Eagles game – but we hadn’t gotten around to looking into it. And knowing us and our remarkable abilities of procrastination, we probably never would have.

Until, thanks to ACME supermarkets, the official grocer of the Philadelphia Eagles (whatever that means – are they require to shop at ACME when they sign those multi-million dollar contracts? LOL!!) were invited to attend the Eagles-Steelers game a few weeks ago. AND my son was offered the highly esteemed position of being the ACME Kick-Off Kid — which basically means that he got to retrieve the kick off tee and be featured on the Jumbotron. Now I don’t know about your kids, but this was like his dream come true. I photoshopped out his name, but they announced him and everything! It was too fun. Of course no one else saw him run out there, they were all distracted by the players at the other end of the field. But I was watching from the stands, and this was my view. Before the game, we were allowed down on the field for warm ups. We were within an arm’s reach of some of the Eagles star players. 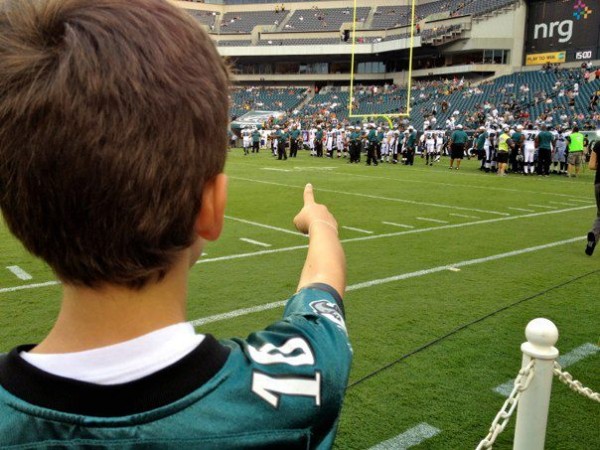 He didn’t get to meet any of the players, but he got to meet one of the umpires. We may or may not have been booing that particular umpire later in the evening. UPDATE: I have just been informed that they are called referees in football. HOW is one supposed to keep it all straight?

Here he is, waiting to go out and retrieve the tee. It was such a fun family night out. Here we are outside the Lincoln Center upon arrival. Can you tell how excited they were about having to stop for one of my self-portrait sessions? Ha. They’ve learned to tolerate me because I get fun opportunities. In fact, I overheard my daughter telling someone the other day, “We got to go because my mom’s job is awesome.” I will remind her that the next time she complains that I’m on the computer too much. While we waited for the gates to open, my daughter got her face painted. Her outfit might not have been festive, but her face sure was! (They actually did provide the kids each with an Eagles tee-shirt but it was SO HOT that night that she didn’t want to put it on, and I couldn’t blame her. She’s excited to have a fan tee to wear for Spirit Day at school this year though!!) Once we were done with kick-off duties, we went upstairs to find our seats. I had no idea where we would be, but as it turns out, they provided us with seats in the Club Box level. It was a private concourse with a full bar, lots of delicious food options and AIR CONDITIONING. Did I mention that it was HOT that night?

The best part was, the seats were outside, so you still felt part of the game. But if you wanted to cool off, you could wander inside.

Everyone got into the game, even those of us who don’t even know what a touchdown is yet. We ended up winning, although we were down most of the night. We actually left right before the big comeback and had to listen to it on the car radio. My son hasn’t quite forgiven me for that yet. Nevertheless, we had a fantastic time. We want to thank ACME supermarkets for providing us with this amazing experience with no strings attached. And for making my daughter believe that my job is awesome!

Zucchini pasta is quickly becoming a family favorite, and you can’t go wrong by adding bacon and heavy cream! My kids gobble this up like candy. SERIOUSLY. It’s amazing. They actually prefer the zucchini pasta to regular pasta. I know this because the first time I made it, I was afraid they wouldn’t eat it over...
View the Post
Uncategorized August 20, 2012

For more gluten free meal plans, see all my Meal Planning posts. And check out my Resources page for all my favorite kitchen tools and products. MONDAY: Three Cheese & Ham Pizza with Rose Romano’s Italian Peppers TUESDAY: Salmon Cakes with a side of brown basmati rice and a side salad WEDNESDAY: Tequila Lime Chicken, Herbed New Potatoes, and sauteed swiss chard (fresh from our...
View the Post
Diary August 18, 2012

When we got to New York City for the BlogHer Conference last week, our first top was the R&R Suite hosted by the fabulous ladies behind ( ( ( Trumpeting Media ) ) ). Here’s a photo of Melissa and me at the event. Pepperidge Farm treated attendees to massages and manicures from the Four Seasons Spa....
View the Post
View All Posts