Last week was a whirlwind as I flew across country and back for the infamous BlogHer Conference. I’m moving to San Diego, by the way. Just as soon as I can convince my husband to update his resume.

I didn’t spend nearly as much time planning out what to wear to BlogHer as I have to most conferences. In fact, I didn’t pack nearly as much either. I’m getting this traveling thing down to a science, which is a good thing because I plan to do more of it. I absolutely love traveling. L-O-V-E!

I checked one medium sized suitcase that held clothes, toiletries, shoes, and an empty purse (with room left over for swag). And I had my camera bag which held my camera (duh), wallet, phone, and my husband’s iPad (which I plan on confiscating every time I travel until he gets sick of it and buys me one of my own.)

The iPad is PERFECT for traveling. I never saw the point until now, but I love how it has movies, my kindle books, and my iPod music all in one device. AND it is much easier to tweet/facebook/email from than my phone. I left my laptop (and its heavy leather bag) at home, I breezed through airport security (you don’t even have to remove your iPad from your bag), and saved my neck and shoulder from the spasms that usually plague me after lugging all that weight around the airport. How awesome is that!?

But back to the point of this post… What I Wore!

I didn’t buy a BlogHer Conference pass this year so my trip was mostly comprised of attending private events, hanging out with friends, and working for Lands’ End in the Secret Style Suite. I also made time to enjoy having a room to myself at the Hard Rock Hotel. I’m quite sure I’m not cool enough to be staying there, but I enjoyed it just the same.

Thursday night was the Clever Girls Party on the rooftop terrace of Hotel Solamar. The attire was rock star, and some ladies went all out with their glam rock costumes — there was even a dead ringer for Lady Gaga. I decided to stick to what I know best (which is NOT glam rock, in case you were wondering) and I opted for my very favorite pair of bootcut jeans and a silk top. This is as rock star as I get, people. I know, camera phone pictures are lame, but if you saw the ones I tried to take on my other camera, well, these will have to do.

Friday night, I started out at the Cheap Sally party, which was held at the swanky nightclub, Stingaree. From there I went to the Museum of Contemporary Art for the YOU-PHORIA party with One2One Network. Then I rounded out the night at a small After Hours Party with Mom’s Fashion File. I wore the dress that I bought on a whim at Nordstrom last week, and it was a hit. I think people were just surprised to see that I own something besides jeans, but it was fun. 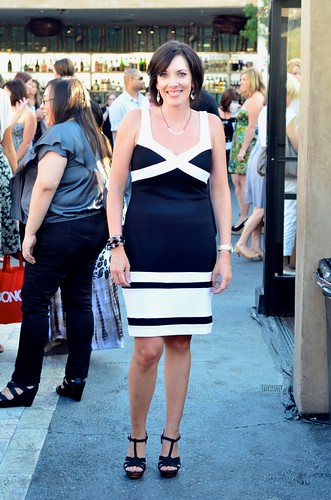 Saturday was all about the Secret Style Suite. I spent most of the day in there, helping the stylists and recording the event. Kate (my fellow style agent) and I wore these Lands’ End outfits. I had intended to wear heels, but I knew that I wouldn’t survive being on my feet all day and night so I opted for my new ViX Ipanemas (swag from the Cheap Sally party). 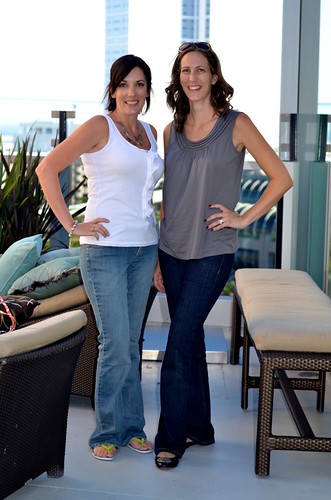 That night, I spent most of my time in the lobby stamping hands, handing out drink tickets, and escorting guests to the elevators for the Style Suite Party in the Elevation Suite at the Hard Rock Hotel. It was tiring, but fun. I loved seeing everyone as they came in. We wore Lands’ End again that night, and even though my outfit was super simple, I still got a lot of compliments. Sometimes simple is good!

No one could believe those jeans were by Lands’ End. At $36.99, these really slim leg white jeans are a lot of bang for your buck. And this is a girl who is used to wearing designer duds. Same is true for the blue jeans I wore earlier in the day. The wash is really great for casual wear, and they fit great. I wish I had a full length picture. Bah humbug. I wore flats again, but I stepped it up just a notch from the flip flops and wore my silver sandals. Once again, I was glad I opted for the practical choice because I was on my feet for about four hours straight.

Now I’m relaxing in Maine, and I didn’t bring a single dress or pair of heels for an entire two weeks. BLISS.

7 thoughts on “What I Wore This Week: BlogHer Edition”

BlogHer was incredible in so many ways. I feel exhausted and exhilarated and inspired, and did I mention exhausted? Not to mention jet lagged. Rather than writing out a 1000-word essay on my BlogHer experience (been there, done that) I thought I’d give you a Best Of list. So without further ado . . ....
View the Post
Fashion August 5, 2011

I know I co-own a style blog and write a weekly fashion feature here on MOAH, but to be honest with you, I’m not a big runway watcher, and I don’t keep up with the latest and greatest fashion designers. However, I do know who Rachel Zoe is because I always check out her picks on Piperlime...
View the Post
Blogging & Social Media August 3, 2011

Every few weeks I get an email asking me how to start a blog so I thought I’d write a post about it. More and more people are turning to blogging these days, and for many different reasons. Perhaps you have a business you want to promote, perhaps you want to keep in touch with...
View the Post
View All Posts