Inspired by JanMary’s 2010 Recap post and my own You Capture 2009 Year in Review, I thought it would be fun to recap 2010 in pictures. This is proving to be a bit of a challenge, as I sit here in Virginia with my laptop that does not have all my photos on it. I have to go through my blog and grab them. Ho hum! It’s taking a while but I’m determined.

January began with snow, snow and more snow. And somewhere in the midst of it all, a bunch of Philly mom bloggers traveled to NYC for the Martha Stewart blogging show, which turned out to be notsomuch about bloggers and more about Martha Martha Martha! I’m not sure why we were surprised.  Despite the disappointment in the show itself, we had a blast.  Here is a picture of us waiting in line to enter the studio.  Dontcha think Starbucks should sponsor us next time?? Also that month, I perfected my current homemade bread recipe, one of my most popular posts of this year. February was overshadowed by Blissdom, when I victoriously won the Tastemaker Fan Favorite, thanks to all of your votes. I’m not sure who to credit with that photo, sorry.  It was obviously not me!

During one of our many winter snowstorms, my family made this ginormous snowman.  I only wish you could have seen him a week later.  He melted in a very, um, suggestive way. We were the laughing stock of the neighborhood.  In fact, we still are.  Everyone got a good laugh out of the memory at our last neighborhood gathering. In March I pretended to be the “fun mom” for a day and took the kids to the Camden Aquarium. Also in March, I was invited to the Invisalign Event in NYC with some of my dearest blogging buddies.  It was such a blast, and I absolutely LOVE this photo that Arianne took of Jen and me. In April we traveled to Virginia for Easter.  This is still one of my favorite photos of 2010, the Mill Mountain Star, which gives Roanoke the nickname “Star City of the South.”  See?  You learned something today, useless though it may be. In May, my husband and I had a little getaway down on the Eastern Shore, thanks to the Hyatt (for our accomodations) and to my mom (for child care so we could get away.) June brought us the Last Day of School, which is always a bit of a mixed blessing. I love having my kids around and I love the lazy mornings and the warmth of the early morning sun and afternoons by the pool and evenings hanging out in a neighbor’s driveway with a glass of wine while the kids play. But trying to balance all that with work? Yeah. Brutal.

June is also the month that I discovered barefoot running, and my knee problems became a thing of the past. July brought us to Maine and too many gorgeous pictures to recount. You’ll have to click on the links to the posts if you want more than this. And we lost our gorgeous Crepe Myrtle to a summer storm. August was BlogHer, and OMYWORD, overwhelmed much!? There are so many photos from this post that I love. Here are a few. Later that month, we went to the Goschenhoppen Folk Festival, and I captured this photo which is one of my favorites of all time. September brought us the obligatory back-to-school photos and glorious freedom for mommy.  I love this picture.  It captures their relationship perfectly. In October we went to my cousin Ashley’s wedding in Chesapeake, Virginia, by way of Williamsburg. And Paul and I went to Seattle.

Later that month, we took advantage of a late Indian Summer Saturday for a day trip to Lancaster County for some Fall Family Fun.

In November, my son turned eleven.

Also that month, I went gluten free and attended the Wise Traditions Conference where I met my whole foodie mentor, Kelly the Kitchen Kop. And even though it was still November, we began to ready our home for the Christmas season. You guys may be sick of seeing this picture, but I’m not. It’s still one of my favorites of the season.

Another angle I love, with our 2010 family portrait in the distance. These are the newest additions to my Christmas decoration collection, a gift from my mom when visited Williamsburg: 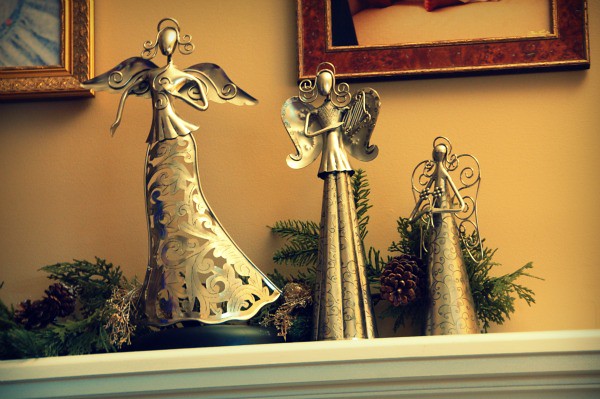 The girls and I were treated to a very chilly evening at Longwood Gardens when I stretched my poor old camera to its very limits, trying to capture the lights in the dark with no tripod.

And of course we celebrated Christmas. THREE TIMES. Our first Christmas celebration, the one with my inlaws, I missed due to what is becoming known around these here parts as The Stomach Bug of 2010. Oh yes, it was epic.

Our second Christmas celebration was a quiet family affair at our home on Christmas Day. There are so many great photos of the kids that you can view in that Flickr photo set, but for some reason I particularly love this photo of our festive coffee mugs (another gift from my mom) with the lit tree in the background. 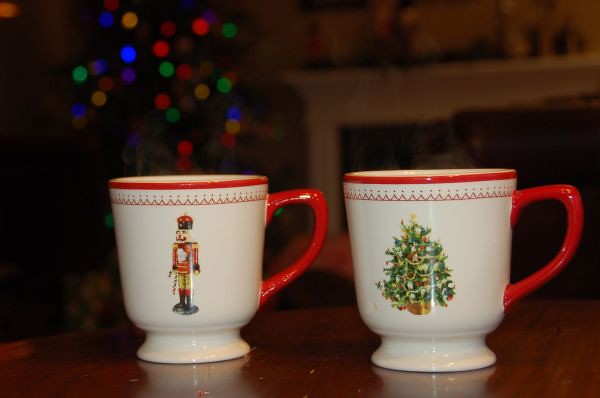 It just captures the anticipation of Christmas morning, at least from a mom’s eye view.

Our third and final Christmas celebration was yesterday here in Virginia. While there are plenty of fun photos of the kids, some of my favorite shots are of my mom’s home. She worked right up until the day of our arrival decorating the house for our holiday enjoyment. There isn’t a room on the first floor that isn’t decked out in Christmas merriment, and I’ve spent half our vacation walking around with our new camera, taking shots of my favorites and practicing techniques I’m picking up from Scott Kelby’s Digital Photography books. I hope you and yours are having a warm and relaxing New Years Day with friends and family. Here’s to more fun in 2011!

It’s that time again! Time to look back over the year and share the first line of the first post of each month. JANUARY: After I got the kids off to school this morning, I sat down here at ye olde computer with my fresh, steaming hot cuppa coffee, all ready to dive into design...
View Post 35 Comments
Uncategorized December 30, 2010

I saw this on The Nester‘s blog and I thought it was such a good idea that I decided to shamelessly steal it. Without further ado, I give you . . . my top 20 referrers from 2010: Big Mama Garden Queen Bye Bye Pie Kitchen Stewardship Moms Need to Know I’m An Organizing Junkie...
View Post 3 Comments
December 27, 2010

Give the Gift of Compassion

This post was supposed to be written before the holidays, but I had so much going on, the email got buried, and I sort of forgot about it. When I found it this morning at the bottom of my lengthy to-do list, I decided to write the post right here and now. Christmas Day is...
View Post 1 Comment
Diary December 25, 2010

The only thing we were missing was the snow. No worries. It looks like we’ll get some tomorrow!
View Post 8 Comments
View All Posts +