Whether you’re a mom or a daughter or a mother figure to someone special, I hope you’re enjoying your Mother’s Day weekend. I’ve had the pleasure of spending this weekend with my mom. She lives 400 miles away, so we don’t often get to spend Mother’s Day together.

We started the day on the porch, sipping coffee and chatting. Then after church, we all went to lunch at the General Warren Inne. It was lovely, and the food was delicious. We need to go there more often. Afterwards, we took a few minutes to grab these pictures in the garden. We don’t look alike AT ALL, do we?? My son took this one of Paul and me with both of my parents. And of course, I had to get the obligatory photo with the kids. (This was at our house earlier in the day.) Taking a Mother’s Day picture is sort of a tradition in our family, as is sharing my Mothers Day Through the Years photos here on the blog. I’m missing a few, but this is what I’ve got.

This was Mother’s Day circa 2000 — my first official Mother’s Day, although I was expecting in 1999 and got a sweet card from my aunt that year. 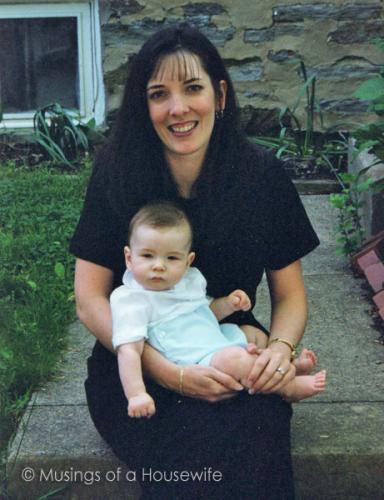 Mother’s Day 2002 — this is the day I discovered I was pregnant with C. D clearly had other things on his mind and was trying to get away from me, but I was determined to get my Mother’s Day photo. Mother’s Day 2004 — I wish my daughters would still let me put bows in their hair. Happy Mother’s Day to you and yours!

9 thoughts on “Mother’s Day Through the Years”

Well, here we are. Another Saturday, another week behind us. My 12-year-old said to me yesterday, “This year has gone pretty fast, but now every day seems like it will NEVER end.” Ahhhh… childhood. I remember it well — those last few weeks of school before summer break. Every day was agonizing in its eternity. But here...
View the Post
Fashion May 8, 2015

Fashion Over 40 with Børn Shoes

I’ve been a shoe girl ever since I was old enough to walk. When I was little, I used to put on my grandmother’s heels and clop around the house. My mom has a picture of me as a child holding a book, pretending to teach school, with my little feet lost inside my Gramma’s shoes. I...
View the Post
Lifestyle May 7, 2015

Summer is in the air! I don’t know about you, but we love to celebrate the warmer weather and the longer days by taking our meals outdoors. Hi, it’s Tonya and I’m back with a fun outdoor dining craft project — DIY cutlery pockets out of burlap and lace. I’m not a huge fan of plastic utensils...
View the Post
View All Posts