Last week I was invited to tour one of Horizon Organic’s dairy farms, located about an hour and a half north of here in the Lehigh Valley. I briefly debated attending the trip because I have read a lot of discouraging things about “big organics”, but I decided to go because I was interested in seeing the farm and hearing what they had to say, and I’m not one to stick my head in the sand. I like hearing other points of view, and I figured it would be interesting if nothing else, right? Well, I’m really glad I did.

I know from living in this area that most farms here graze their animals, but I was still pleased to see the cows happily roaming on pasture when I drove up the lane. (Okay, so you can’t see them in this picture, but they are behind the barn.) Later we would learn that they practice rotational grazing, which is much better for the land and the animals, so I was pleased to hear that. Around my house, I see a lot of animals on the same fields day after day after day. 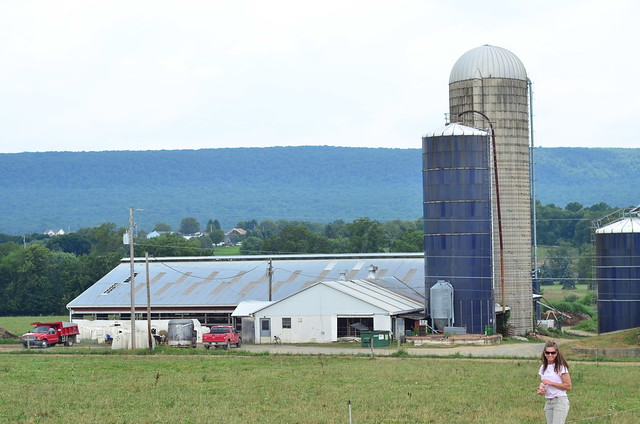 Barry Byler, owner of Byler’s Dairy in New Tripoli, PA, greeted me as I pulled in his driveway. While we nibbled on delicious sandwiches from nearby Wannamakers General Store (and they went out of their way to have gluten free sandwich options for me!) Barry explained that he grew up on a farm, went to college to study agriculture and genetics, and came back to start his own farm. He said with a twinkle in his eye, “I went to school with lots of kids that didn’t grow up on farms, and I like how I turned out better than how they did, so I decided to raise my kids on a farm.” I guess you can’t argue with that!

His son, who is 14, already takes an active part in the workings of the farm. At one point in our visit, he showed us the Bale Wrapper — a machine that wraps up bales of hay and stores them in long tubes for the animals to eat. 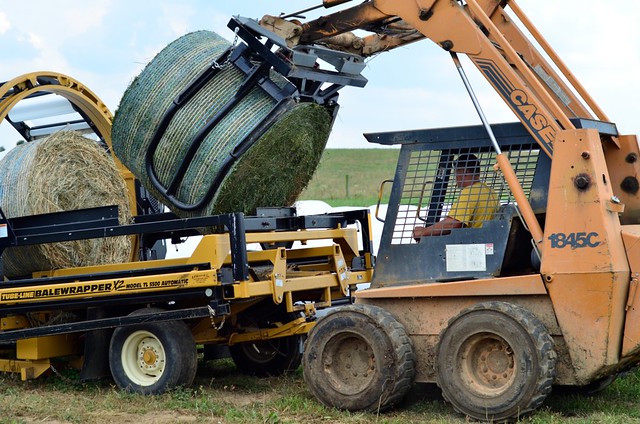 A few years ago, Barry transitioned from a conventional farm to organic and now he sells most of his milk to Horizon to be combined with milk from other farms in the region for Horizon’s organic products. He admitted that he hadn’t always been so green, but when he started farming organically and sustainably, he discovered that if you let things happen naturally, the way God intended, it’s so much better for everyone involved. I couldn’t agree more.

Barry explained that in the transition from conventional to organic, there are a lot of things you just don’t need anymore. For example, they no longer use the silos as they don’t need to store grain. (Cows are not designed to eat grain; it makes them sick, which causes them to need antibiotics. Cows are ruminants and designed to eat grass, and fortunately in our area grass is plentiful so the silos aren’t necessary.) He had several other similar examples, and I couldn’t help but think what a waste conventional farming is.

The highlight of the trip (for the kids, at least) is when Barry took us up to the pasture and showed us a cow patty. He explained that because they don’t use insecticides, there are live bugs inside the cow patty that help it decompose so it eventually feeds the grass. He explained the beauty of the organic farming model to the kids — how the grass grows, the cows eat the grass, their waste fertilizes the grass and helps it to grow again. The kids were duly impressed with this natural life cycle, and I dare say a few of the adults were too.

Barry had also done his homework. I overheard him talking to several in attendance about things he’d seen on their blogs, and at one point he asked, “Now who here drinks raw mik?” That sparked an interesting discussion.

Come to find out, Barry knows of the farmer where I buy my milk, and he actually had a raw milk license at one point. He does drink his own milk straight, and he didn’t seem to have any reservations about the practice of drinking raw milk from healthy organic farms. I was a little bit nervous before I arrived about this topic being an awkward talking point, but as it turns out, we’re actually on the same page. In fact, he explained that he would truly love to sell raw milk and make cheeses and yogurt and all that, but at this time he just doesn’t have the manpower, which makes me sad of course. I hate to think of all that beautiful, nourishing, organic, grass-fed, raw milk, full of beneficial bacteria and enzymes, getting heated up and denatured.

I questioned the Horizon reps about why they use ultra-pasteurization rather than the lower heat model. (I wrote a post a while back explaining the difference between pasteurized and ultra-pasteurized. And actually there are three methods, not just two, just to complicate matters further. They are all explained at length in my post.) Horizon claims that there’s is no difference in nutrition and taste between the two methods — and actually, they use both methods, although I’ve only ever seen it on the shelves marked ultra-pasteurized in our area. I know that is what the industry states, but ultra-pasteurized milk doesn’t even require refrigeration so I find it hard to believe that it has the same nutrient value. And there is also the issue of the probiotics and enzymes that are destroyed by heat. But then again, both pasteurization methods heat the milk enough to kill bacteria — that means the good and the bad — so in the end, I don’t know if it’s worth worrying about which method is used. This is, of course, is why we choose to drink ours raw.

That said, I realize that raw milk will probably never become the mainstream choice, and as long as people are drinking gallons of pasteurized milk a year, I am happy to know that some of it is raised organically and on pasture.

Tom Spohn, Director of Milk Supply for Horizon, was present at our event. He works closely with the farmers and coordinates the milk supply with the regional distribution centers that produce the various Horizon products, and he explained to us that it is their passion to turn as much farmland as possible into organic and sustainable, which of course I was happy to hear.

Horizon has two of their own farms, one in Idaho and one in Maryland, that supplies about 6% of the milk to Horizon products. The other 94% is provided by family farms from 23 states across the country. I inquired if Horizon owns these family farms, but they do not. The family farmers are contracted suppliers and operate their farms according to USDA organic regulations and the National Organic Standards.

I also asked if all Horizon farmers are as committed to pasture grazing as Barry Byler, and that answer was a bit more vague. There are over 600 farms that are contracted with Horizon, and each is responsible for complying with federal regulations, which have become more stringent in recent years thanks to the National Organic Program’s (NOP) Final Pasture Rule. I read up on that a bit, and it seems like the latest revisions were a big improvement.

All this to say, it is ideal to know your farmer and get your milk directly from the source. But this is unrealistic for many, so the next best thing is to buy organic from a reputable company.

In addition to Tom, we also met Hilary and Stephanie, who all three work closely together in their Colorado office, as well as Liz, who is a regional manager and lives in central Pennsylvania. It was clear they all love working for Horizon and believe in what they’re doing, which is always refreshing to see.

The kids had a blast at Byler’s Dairy farm. After the cow patty and bale wrapper demonstration, we wandered over to the barnyard where there were some baby calves that were still too little to be on pasture. One was only 2 days old, and he had been a preemie, so Barry feeds him with a gigantic baby bottle. The kids were enthralled. 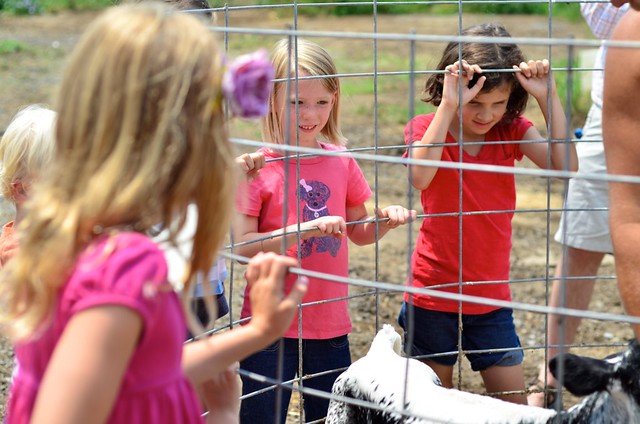 My older daughter could have stayed all day. She was ready to go to work — flowers and dresses and all. 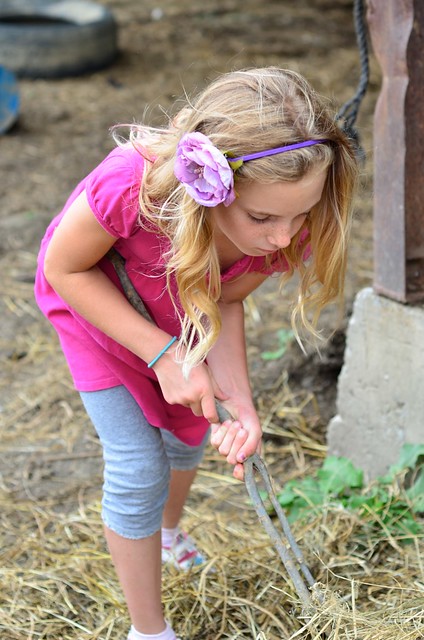 We hung out for a while, visiting with the calves and watching the cows file in a straight line down the meadow and towards the barn for a drink of water. Barry explained that grass contains a large percentage of water, so grass-fed cows don’t really need to drink a lot of water; but water is available to them at all times in the barn, and on extremely hot days, they do take advantage of it. 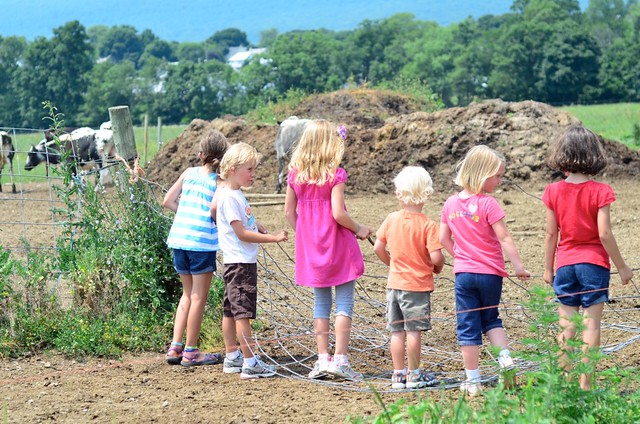 I sincerely want to thank Barry for opening up his home and taking a day off from work to host us at his farm and share his passion for organic farming, as well as Horizon for making this trip possible.

Disclosure: I was provided with a gift card to cover my travel costs. All commentary and opinions expressed in this post are my own and do not represent Horizon Dairy. I was not compensated for this post, nor was I required to write about this trip.